Sounds complicated – but they aren’t!!!

What makes these tomatoes special is that they are peeled. Don’t worry – after you blanch them, their skins slip right off, and you are rewarded with tender little tomatoes. They’re given a serious kick by the vodka.

Cut a small X in the bottom of each tomato. Use a knife with a sharp tip – sounds hard but it isn’t. You’ll be an expert after the firet few. Blanch tomatoes 5 at a time in a 2 quart saucepan of boiling water for 3 seconds, then immediately transfer with a slotted spoon to a bowl of ice and cold water to stop the cooking.
Drain tomatoes and peel. (Just squeeze the end with the “X” and the orb will pop right out – my DD helped!) Transfer to a large shallow dish. 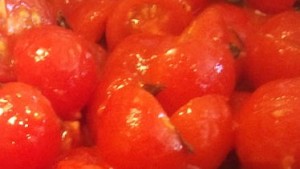 Stir together vodka, sugar and zest in a small bowl until sugar is dissolved. Pour over tomatoes and gently toss to coat. Marinate, covered and refrigerated, for at least 30 minutes.

Stir together salt and pepper in a small bowl. Serve with tomatoes for dipping.

I put the tomatoes in a small bowl, the salt/pepper mixture in another small bowl, and a shot glass full of toothpicks on a small platter..

This has been a great hit at parties!!